Join notorious at the start of the Great British Summertime for a musical journey through all ‘Four seasons in one day’ in an English pub garden.

Featuring songs about the weather from around the world, including ‘Tres Cantos Nativos’ from the depths of the Amazonian rainforest to French memories of ‘Autumn Leaves’.

Bring family and friends along, safe in the knowledge that if the weather does decide to give us ‘Rain, rain, beautiful rain’ we won’t be ‘Singing in the rain’ thanks to the fantastic covered beer garden at the Spotted Dog!

This is a free, unticketed event – please just turn up on the day! Children welcome.

Birmingham’s choir with a difference, notorious, is back for their first gig since celebrating their 20th anniversary in style at the Town Hall in November. Musical Director Clare Edwards, who was awarded the Lady Hilary Groves Prize 2017 for outstanding contribution to music in the community, will be conducting the choir on an intergalactic odyssey at the Electric Cinema on 24th March.

The non-audition choir, who wowed a 500-strong audience with a classical repertoire last time, will be taking on classics from the world of Sci Fi. From Bach to Bjork and Carpenters to Chopin the audience will be transported on a spectacular musical journey as the choir perform tunes from films and TV, inspired by space and the future.

Instead of an orchestra, this time notorious will be accompanied by theremin player Ms Hypnotique, Beatboxer Pye and keyboard player Stephen Webster. With the concert taking place in such a prestigious cinema, there will of course be visuals throughout to transport the audience even deeper into space.

The choir was launched in 1997 with an artistic vision to be different and having performed in venues as varied as a cathedral a cave and a coffin factory they have certainly achieved that. Now they want to take the audience into another dimension.

Musical Director Clare Edwards explains why she was inspired to take on this theme: “Notorious has a really wide ranging membership but one thing we all have a love of is Sci Fi! Everyone has a story or a memory from their favourite Sci Fi film and the music is just as evocative. We are delighted to be joined by Ms Hypnotique on Theramin and Pye our beatboxer to bring these tunes to life. We’ve done a lot of crazy things in 20 years but this gig is a step into the unknown – come with us!”

There will be two performances of the choir’s stellar programme on March 24th; at 3:30pm and 6:30pm and tickets are available on the Electric Cinema’s website: http://www.w.theelectric.co.uk/book-tickets.php?film=2020

This term, our publicity officer Josie has been asking the choir to share something of their lives in the build up to our biggest ever concert at Birmingham Town Hall.

Using the hashtag #mynotoriouslife members of the choir have been showing the reality of fitting in rehearsing for such a momentous occasion with the demands of everyday life.

Josie was first to go with this photo of her in her car having a little sing before she starts work: 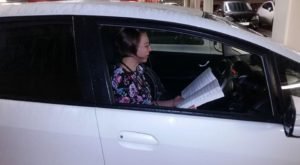 As Chair, I had to join in with my eco-friendly take of singing a bit of Rutter while cycling through a nature reserve: 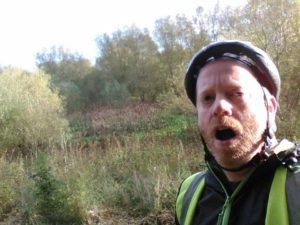 Fellow tenor Ian Sutton did a puntastic, “The lengths I go to for notorious”: 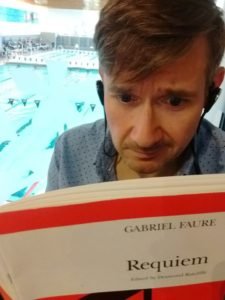 Altos Jo and Frida shared a lovely shot on a walk through Moseley Bog with Frida’s children: 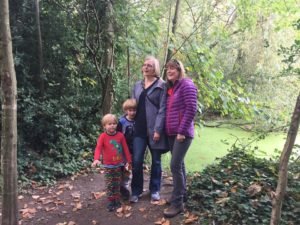 Soprano Helena showed us that even on holiday in beautiful Prague, she was still getting in some practice: 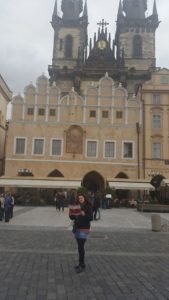 Her fellow soprano Ruth showed a slightly less glamorous, but just as dedicated side, as she rehearsed while grating cheese: 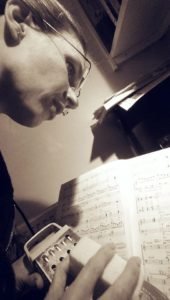 Wherever our choir members are, they’re all excited about 25th November at Birmingham Town Hall where we’ll have a choir of 75 people assembled to sing Faure’s Requiem and Rutter’s Magnificat. It will be a night to remember as all these hours of practice bear fruit in glorious music! Don’t forget to buy your tickets here: https://www.thsh.co.uk/event/notorious-at-20-faur%C3%A9-requiem-and-rutter-magnificat#tab0=details

This is a year of celebrations for Notorious and this time next week, we’ll be recovering from what promises to be a fantastic night at our 20th anniversary ball at Highbury Hall. Music, food and friends having fun together is a lot of what makes the choir such a great one to be part of, so I can’t wait.

Before that we have a big rehearsal, including friends from afar travelling up to Birmingham and getting in some quality time singing the fantastic Magnificat by John Rutter – one of the most uplifting pieces of music you could ever imagine – and the exquisitely beautiful Requiem by Faure.

Those two works have been chosen for our biggest ever concert, performing at Birmingham’s Town Hall on 25th November and you can certainly see why – the audience are in for a real treat, just as much as we love singing them. Ticket sales are going really well, so I’d advise you to get on and book yours as soon as possible if you want to get one of the best seats in the house. You can buy them here through the Town Hall website.

It’s great to see how keen people who haven’t sung with us for years are to come back and take part in this special concert. Founder members and those who haven’t sung for ten of fifteen years have all slotted back in seamlessly. This twentieth anniversary year keeps getting better and better, so don’t miss the climax!